The name of the great Victorian engineer Isambard Kingdom Brunel is widely known for his heroic engineering feats but we should also raise our glasses to his father, Marc Brunel, born this month in 1769 – for it was he who gave us the first factory assembly line ‑ and something that was of great importance to Britain’s continuing naval dominance in Kydd’s day 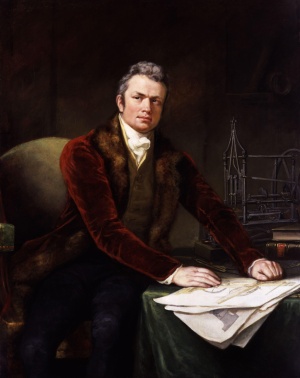 Marc Brunel was born on 25 April 1769 in Normandy, where his family had farmed for centuries. A Royalist, Brunel was commissioned into the French Navy but after six years’ service fled Revolutionary France for America. There, he worked on various engineering projects and at the age of 27 was appointed chief engineer of New York. With an introduction to the Admiralty he sailed for England in 1799 to approach the Navy with a scheme for making blocks with a suite of special machines he had patented.

A sailing man‑o’‑war in Kydd’s day typically needed up to 25 miles of rope, much of which was used to raise and lower the sails with the help of wooden pulley blocks. Blocks were also needed to work the great guns and for a variety of other functions throughout the ship – anchors and their associated gear, ship’s boats and storing ship. In total, sometimes 1000 blocks were required for a ship. HMS Victory carried 768 blocks (the largest being 26 inches long, the smallest six inches) for her rigging and 628 for her guns.

At the end of the eighteenth century blocks were all made by hand by a firm called Taylor Walker in Southampton. The Navy ordered more than 100,000 of these a year.

Brunel’s scheme required the services of a highly skilled mechanic and he approached Henry Maudslay. The story goes that Brunel was so impressed with the precision screw that Maudslay had displayed in the window of his premises in Wells Street that he took in a drawing of one of the 26 machines that he had designed to have him make a small prototype. Brunel was anxious to keep his invention secret until he was sure he could trust Maudslay.

A week later when Brunel went back to see his work he showed Maudslay a second drawing who immediately grasped what he had in mind and exclaimed, “Ah! Now I see what you’re thinking of; you want machinery for making blocks.”

Brunel and Maudslay collaborated on building models of the machines, some of which have been preserved in the Maritime Museum in Greenwich. Then they went ahead and built the full‑size machinery and set up the world’s first production line in the block-making house in Portsmouth. 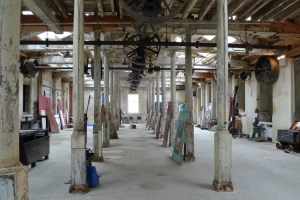 The block‑machines were made entirely of metal; the final design also had input from Bentham and Simon Goodrich, Mechanist to the Navy Board. As well as ensuring exceptionally accurate products, the process was far less labour intensive – ten men could achieve what formerly required 110.

By about 1807, Brunel’s block-making machines met the Royal Navy’s entire requirement and some were still in operation for the D-day landings.

The machines attracted an enormous amount of interest from the time of their installation, ranging from Horatio Nelson to the Princess Victoria, who was shown them as part of her education.

During the course of the Napoleonic War there was a steady stream of foreign dignitaries and military men wishing to see the machines for themselves. They were also described and illustrated in a number of contemporary encyclopaedias.

They became such a popular tourist attraction that Brunel urged Bentham to erect a fence around the mill to keep visitors at bay.

Some of the actual block making machines from Brunel’s day are now on view at the Science Museum, London.