‘Fans of Napoleonic naval action will certainly enjoy sailing with Lieutenant Thomas Kydd, RN in Stockwin’s sixth book in his Kydd Sea Adventure series. Set in the Mediterranean during the French expeditions against Egypt and Syria, Kydd’s service in H.M.S.Tenacious takes him to Toulon, Minorca, the Battle of the Nile, and the siege of Acre. Along the way, he encounters the always intriguing Lady Hamilton, the equally fascinating Admiral Nelson, and the largely forgotten but indefatigable defender of Acre, Sir Sidney Smith.

The historical events occupy center stage, but Stockwin fleshes out the story by continually reminding us that Kydd is designed to portray a living being and not simply a stereotypical hero. The treatment of one of Kydd’s fellow officers, a nobleman named Renzi, who rejects his life of privilege in favor of a man-of-war in wartime, is an unexpected highlight. I may be overstating the case when I say that secondary characters in novels such as this are rarely given the breadth and depth routinely accorded the hero or heroine. Renzi’s noble background is only hinted at in opening chapters, but the tension between this officer determined to make his way in the Royal Navy and his equally stubborn father, who wants him to resume his duties as the eldest son, provide the reader with a well-drawn glimpse into English upper-class life of the time.’ – Historical Novel Society

The original Band of Brothers were all captains at the battle of the Nile, and they were the elite of the Navy.
They had known Nelson for a number of years and there was a unique trust and understanding between them. This was not repeated in the same degree in any other fleet Nelson commanded.

But not all of the Nile captains were equally close to Nelson. We now know that there was an inner circle who he consulted regularly and they then conveyed the results of the consultations to the remainder by various means. But this inner circle was not static. Of the original Nile captains, only Hardy served in all Nelson’s later battles. Ball, for example, became governor of Malta and Miller was killed in an accidental explosion at the siege of Acre.

There’s a poignant story about Captain George Blagdon Westcott, the only one of the celebrated Band of Brothers to die at the Nile. He was born in Devon of humble origins, and left a widow and daughter. Nelson made a point of visiting them and presented Mrs Westcott with his own Nile medal saying, ‘You will not value it less because Nelson has worn it.’ He later wrote to Lady Hamilton about their low circumstances: ‘The brother is a tailor, but had they been chimney-sweepers it was my duty to show them proper respect.’

The dramatic painting on the book’s cover which features the French flagship L’Orient exploding at the Battle of the Nile and the small boat with Kydd aboard picking up survivors was painted by Geoff Hunt RSMA.

When he created this artwork Geoff had not painted L’Orient before, although he had depicted the Battle of the Nile. He told me he was not aware of any existing plan for this huge ship (though he thought there might be one in a French archive) but French designs tend to be standardised so he felt justified in using the plan of Commerce de Marseilles which the British captured at the fall of Toulon in 1793.

‘It is difficult for me to choose a favourite from the Kydd series, but Tenacious does stand out. Nelson’s victory at the Nile is so clearly written that I found myself understanding points of strategy that I had not grasped while reading history books. The Nile is just the beginning though; we get to see some real maturity in our characters in this book. Also present is the layer of the Kydd series that draws me to this day – the sentimental side. Stockwin portrays the rough and often violent world of Kydd’s naval life so vividly that when we see the emotional effects of lost friends we empathise. All too easy it is for the modern military author to marginalize casualties and allow them to become simply numbers. Stockwin, through this whole series, manages to balance the scales. Shortly after turning the last page, (and what a page it was) I had to go pull my copy of Kydd off the shelf and turn back to page one.’ – Jeff Kloss

‘Be prepared for a more confident Kydd, able to command respect from officers and men alike. Informing at so many levels, the narrative of Tenacious moves effortlessly between ships-of-the-line commanded by Admiral Nelson, eighteenth-century European politics, fine social gatherings and bloody carnage. A magnificent read.’ – Patricia Fray 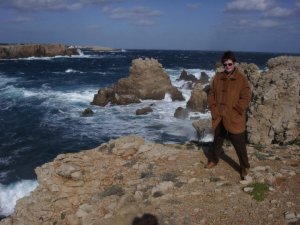 Kathy braves the winds on the rugged Minorca coast

‘Like a kid with a new toy I opened the pages of Tenacious. Immediately I am back on board, alongside Kydd and his fellow officers. Well-known characters of history are brought to life and in the ensuing battles the story unfolds – and you +become+ part of the adventure, such is the power of Julian’s writing. This is the series I would like to see on the silver screen!’ – David Pinsent

‘It’s a dangerous world in 1798 – but Kydd rises to the demands of the age. Tenacious is a superb read and one you will likely repeat again and again.’ – John Brown

‘The cover of Tenacious is beautifully illustrated, and the content is brilliantly evocative and accessible, even to followers who have little technical knowledge of naval matters. Julian Stockwin conveys to his readers a deep and certain knowledge of the sea – and at the same time delivers an excellent read.’ – Barbara Spencer

Previous blog on Tenacious : The Hunt for Napoleon’s Fleet
Tenacious has been published in the UK/US in English, in translated editions and in ebook, large print and audiobook.
The cover of Tenacious is also available as a superb Limited Edition print http://www.artmarine.co.uk/kydd.aspx
Buy on Amazon or The Book Depository (free postage worldwide!) Also available at most bookstores.
Detailed list

Copyright notices
Band of Brothers image: By Sir Robert Smirke, William Bromley, John Landseer, R. Bowyer (Collections of the National Maritime Museum) [Public domain], via Wikimedia Commons
Every effort is made to honour copyright but if we have inadvertently published an image with missing or incorrect attribution, on being informed of this, we undertake to delete the image or add a correct credit notice