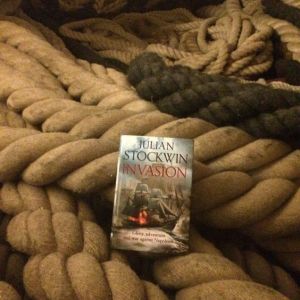 ‘Commander Thomas Kydd, RN, is determined to once again sally forth to protect England from the threat of Napoleonic France. In this tenth volume of a thoroughly enjoyable series, our nautical hero witnesses the birth pangs of a new era in naval warfare. He is tasked by the high command to work with the eccentric American artist and inventor Robert Fulton on the development of Fulton’s submarine and torpedo-“infernal machines” to one comfortable on the quarterdeck of a sailing ship man-of-war.

The novel deals with the very real threat posed by a French invasion of England. Robert Fulton had first demonstrated his revolutionary weapon to the French but was frustrated at their hesitant reaction. Kydd’s good friend, Nicholas Renzi, is instrumental in convincing the reluctant American to transfer his allegiance from Napoleon to George III while Kydd is engaged in the deadly work of coastal warfare in the treacherous waters of the English Channel and the Downs.

Stockwin continues to display his talents in transporting his audience from the 21st century to the chaotic worlds of Kydd, Renzi, and their imperiled homeland and its enemies. He captures Georgian society and the closed world of a Royal Navy warship particularly well and, as one expects, goes into action with swords drawn and cannons and carronades blasting. Britannia does indeed rule the waves.’ – Historical Novel Society 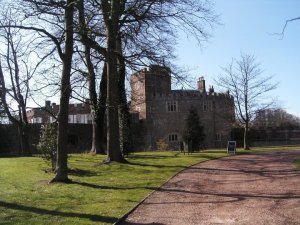 Walmer Castle, Deal. Pitt used it as a residence for a time and it was also a focus for clandestine operations.

A naval militia established to provide a close-in line of defence and obstruct the operation of enemy shipping, principally during the French Revolutionary and Napoleonic Wars – after all, for most of the war, Bonaparte’s troops were under arms just 19 miles away! The earliest recorded use of the term was in 1793, when Captain Sir Home Popham organised groups of fishermen to guard against French vessels off the coast of Nieuwpoort, Belgium. At Popham’s suggestion the British Admiralty subsequently authorised the formation of Sea Fencible units along the English and Irish coasts, supported by a network of Martello towers. Popham’s Sea Fencible companies consisted of merchant seamen using their own private or commercial vessels, but operating under letters of marque that authorised them to capture enemy ships should opportunity arise. The Navy provided the Fencibles with uniforms and weapons; it also protected them from the depredations of navy press gangs. The Admiralty disbanded its Sea Fencible units in 1810. 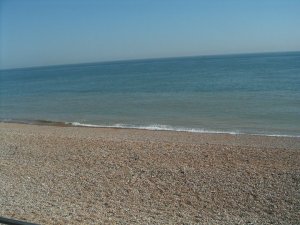 Shingle beach, Deal – in calm weather! The Goodwin Sands is on the horizon…

A 10-mile long sandbank in the English Channel lying 6 miles off the Deal coast in Kent, England. The area consists of fine sand resting on an Upper Chalk platform belonging to the same geological feature that incorporates the White Cliffs of Dover. The banks lie between 26 ft and 49 ft beneath the surface, depending on location, since tides and currents are constantly shifting the shoals. More than 2,000 ships are believed to have left their bones upon the Goodwin Sands.

I always enjoy bringing real-life characters into my Kydd tales and some of them make an appearance in more than one book. Admiral Sir James Saumarez is one of these, playing a role in both Treachery and Invasion. And when Kydd in involved in the Baltic Campaign in a few books’ time, Saumarez will again be part of the story. Do you have a favourite recurring historical (or fictional) character in the series? Let me know!

Previous blog on Invasion : Invasion: Glory and Adventure
Invasion has been published in the UK/US in English, in translated editions and in ebook, large print and audiobook.
Buy on Amazon or The Book Depository (free postage worldwide!) Also available at most bookstores.
Detailed list

Copyright notices
Invasion aboard Victory by Paul Waite
Every effort is made to honour copyright but if we have inadvertently published an image with missing or incorrect attribution, on being informed of this, we undertake to delete the image or add a correct credit notice