I’m delighted to have signed a contract with Hodder & Stoughton for four more Kydd titles. To the Eastern Seas, the first of these, will be published in October next year in hardback, ebook and audio download. Thereafter, another Kydd tale will be launched approximately every nine months. This will bring the total to 25, but rest assured, I have plans for further adventures for Kydd, Renzi and all the doughty crew after that!

Here’s a taster of To The Eastern Seas: 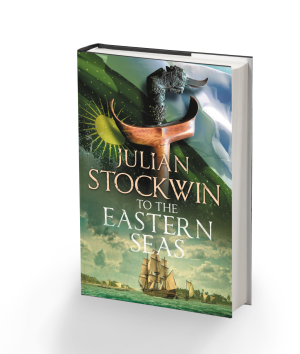 With Bonaparte held to a stalemate in Europe, the race to empire is now resumed. Britain’s ambitions turn to the Spice Islands, the Dutch East Indies, where Admiral Pellew has been sent to confront the enemy’s vastly rich holdings in these tropical islands. Captain Sir Thomas Kydd joins reinforcements to snatch these for the British Crown.

The two colonial masters of India and the East Indies face each other in mortal striving for the region – there can be only one victor to hold all the spoils. The colonial genius, Stamford Raffles, believes Britain should strike at the very centre of Dutch spice production, the Moluccas, rather than the fortresses one by one but is fiercely opposed. Kydd, allying himself to this cause, conspires to lead a tiny force to a triumphant conclusion. Subsequently, a battle for Java and an empire in the East stretches Kydd and Tyger‘s company to their very limits.

A Collectors Set will be offered for this title, with details released in the New Year.