As a former print journalist and magazine editor Kathy was delighted to take on the assignment of interviewing McBooks Press. She recently spoke with Publisher Alex Skutt and Art Director Panda Musgrove. But first a bit of bio on Alex and Panda. 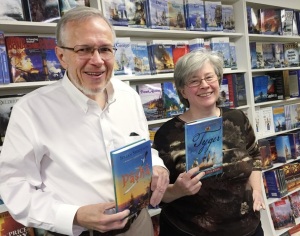 Alex moved to Ithaca, New York, when he was nine years old, and graduated from Cornell University with a degree in engineering physics. After college he opened a bookstore and called it McBooks. Over the years he has owned a number of stores around the States. Alex started McBooks Press in 1980, selling his other businesses in the mid 1990s to concentrate on publishing. Panda has been with McBooks since 2005 and is responsible for the visual design, production and ancillary marketing materials of all new books. Panda has a strong creative background, having worked as a graphic designer and also a digital imaging specialist. She grew up in Washington, graduating from San Francisco State University in product design and development and moved to New York in 2002.

Now over to Kathy

I first asked Alex about McBooks’ publishing philosophy. Like many readers of naval fiction, Alex got hooked on Patrick O’Brian’s Aubrey/Maturin series. Next he read Alexander Kent’s Bolitho novels. But, it was probably Captain Frederick Marryat’s books that turned him into a publisher of historical nautical fiction. Despite having a little difficulty with some of Marryat’s archaic language, he realized that he had found a British sea-going Mark Twain.

The books sold well and McBooks Press began acquiring rights to other historical fiction writers – mostly British authors whose works were not available in the United States.

Says Alex (as I smile smugly):

‘Of course one of our best finds was Julian Stockwin – whose Kydd series is perhaps the finest historical fiction currently being written!’I then suggested we talk about how McBooks’ publishing schedule differs from the UK publisher of the Kydd series.

‘Since our goal is always to release the Kydd books on the same date in the US as in the UK, this can be a challenge. Our partners, Hodder in the UK and Independent Publishers Group in the US each have their own schedule and those schedules aren’t coordinated. Practically this means that we don’t know ahead of time what our portion of the production schedule will look like – or even which tasks we may need to do in order to get a book out. For example, we always attempt to use the handsome British cover art, but it is almost always difficult to secure it by the time our distributor needs it for early marketing materials and they don’t like us to send them a temporary cover that is just for that purpose. So, for several weeks each spring we annoy the heck out of Hodder asking repeatedly for art that they don’t yet have while simultaneously begging our distributor to p-l-e-a-s-e give us another week to procure it. During this time when we are unsure whether we will get cover art the wait can become a little stressful on this end. But, truth be told, Panda always loves getting the opportunity to make a Kydd cover—even if it means she has to do it at the last minute!’‘The text files are another matter. Although these days we tend to make our ARC (the uncorrected book that goes to reviewers) from Hodder’s layout, we have in the past typeset a book twice—once for our ARC and then again after we receive a final file. If Hodder’s text files are not available by the date that we need them we have also sometimes needed to proofread the manuscript in Word before we typeset it. If we are lucky enough to get the final, final manuscript from Hodder by the time we need it then Panda Americanizes the punctuation while simultaneously typesetting the book. Once the book is in pages we always send a printed copy of the layout to one of our proofreaders.’Asked why he feels the sea tale is still relevant and appealing to McBooks readers Alex responded:

‘The adventures of a frigate captain who leads several hundred men halfway around the world on a heroic mission where he must single-handedly decide how to deal with the innumerable surprises that he is sure to encounter is thrilling! The sea story will be relevant so long as we are interested in the problems of command, the mysteries of interpersonal relations, the beauty and power of the natural world, and the desire for excitement and adventure.’Then I put him on the spot and asked him to pick a favourite Kydd title:

‘I think Julian’s writing has become even more remarkable and vivid as the series progresses. Each new book becomes my favorite. It has been great fun to see Kydd and Renzi grow, to watch them learn about life, take on new roles and to watch their friendship mature. Reading the more recent books, it’s important to remember that Kydd was originally just a pressed landsman. The later Kydd, who has developed into such a masterful naval leader had modest beginnings. But, from the start you also could see that he possessed strong character.’Asked whether he would like to add anything to the interview Alex said:

‘One of the rewards of working at McBooks Press has been the good fortune we have had by becoming friends with George Jepson – the voice behind Quarterdeck, our free bi-monthly e-newsletter. George is a huge fan of historical nautical and military fiction, a great writer, and a friend to many of the authors and key figures in that genre so it is no surprise that Quarterdeck has been a great way to keep our customers aware of current events.’

‘All the elements of action, surprise, disappointment, horror and elation were woven by you into a sea story for the ages. It is one of the best Kydd books to date!’‘I was impressed from the beginning, and all through, by the variety and frequent change of scene and action in the smoothly continuous plot. But what really took me by surprise was how strongly my emotions were swept away by complete empathy with those of Kydd and his Tygers through those last 54 pages!’‘I don’t know how you do it but Tyger is better than your last book. The character descriptions are strong … The action scenes are real heart pounders. The political shenanigans read so true and gossipy. It could have been a dull recitation but you made it very lively.’And this is what The Toledo Blade newspaper had to say about Tyger

McBooks Press has kindly donated two copies of Tyger for a draw (open to US residents). Just email julian@julianstockwin.com with your postal address and ‘Tyger draw’ in the subject line. Two winners will come out of the hat on Nov 2