Team Stockwin will be raising a glass (or two…) tonight!

‘I really must complain about this latest edition of the Thomas Kydd series. I have found myself reading it, unable to put it down and at the same time, fretting because I am fast approaching the end … I am down to the last few pages and will soon be suffering from withdrawal symptoms until the next instalment.’‘The thought that I have to wait almost a year before reading the next Kydd book is daunting.’

‘I’m anxiously waiting to see where Kydd and Renzi are headed next. One book a year isn’t nearly enough’

Kathy and I, along with my editor Oliver Johnson and my agent Carole Blake, have given a great deal of thought to see if it might be possible to write and publish more than one book a year in the Kydd Series. I’m delighted to say that this will now take place, starting next year. It will mean a pretty tight schedule for Team Stockwin but I’m confident that it is achievable.

This is the Press Release that has just gone out. 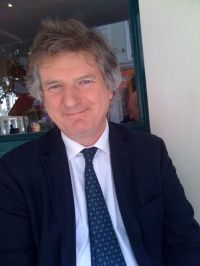 Oliver Johnston, my editor at Hodder

‘Hodder and Stoughton are pleased to announce the acquisition of four new novels by Julian Stockwin featuring his Napoleonic era naval hero, Thomas Kydd from Carole Blake at Blake Friedmann. The Kydd novels have been continuously published one book a year since 2001, but due to popular demand for this beloved series, Hodder will, after the publication of Inferno this Autumn, publish numbers 18 and 19 of the series in 2017 and 20 and 21 in 2018.’

It’s a testament to the enduring popularity of this series that we will be publishing two novels a year from 2017. Julian’s Kydd books must be the most popular current series set in the Age of Fighting Sail and long may he continue!